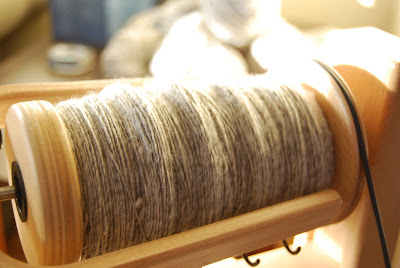 A few years ago Mr. Lanners’ Pottery confessed he would like a sweater, especially if I hand-spun and knit it. While at our local sheep and wool festival we looked at the fleeces submitted for judging. He chose a dingy gray Shetland fleece that won best in breed and we were off.

I dutifully checked out Aldon Amos from the Textile Center library and set off to scour this fleece. Having a basement devoted to dirty stuff I thought no problem. Two hours later I had enough. I commend those who scour and prepare their fleeces. I personally could not merit the time spent on that part of the process when I have steadfastly proclaimed knitting and spinning a hobby. All this lanolin and poo was seriously cutting into my knitting and spinning time. So the fleece was bagged up and it sat undisturbed in our camping closet for a year.

In the mean time I began to attend many festivals and saw people purchasing fleece and dropping it off at a wool processors booth. I asked around getting the opinions of friends and festival goers. I finally remembered to bring it along on a trip and at the Wisconsin Sheep and Wool Festival, in September 2007, I gave the Shetland, an alpaca, and a Lincoln/ Corriedale blend too, to Zeiligner’s Woolen Mill. Dropping it off at a festival saved me shipping one way and I also received a discount. As I was busy making pots for my holiday season I totally forgot about the fleeces I had sent for processing.

Early in November a large box arrived and inside were the fleeces wonderfully transformed into clouds of roving. This dingy gray Shetland, can you tell I was originally a fan?, Mr. Lanners’ had chosen had been transformed into a beautiful silver roving with traces of black scattered throughout. The box went into a closet as there were pots to make and shows to do. Another shameful year passed where I did not spin this fleece. Rest assured the husband was supplied with a different sweater and a few pairs of socks in the interim. That all brings us to 2009.

Traveling to festivals and shows one accumulates a fair amount of stuff. Especially fleece and pretty roving. I’ve decided this is the year I will spin some of that buried treasure. I have dutifully started with the Shetland. Almost four pounds of the stuff. It is never ending. I am easily tempted by other shiny objects, five projects on the needles currently, and have committed to spinning at least once a week with a friend. Kind of like the gym – but no particular attire required. So far I have managed to spin and ply six skeins and I’m guessing I’m 2/3 finished with the bag. Oy! This fleece is an absolute joy to spin and the processing was well worth it! Here’s a link to the Shetland Sheep Society. Smirslet, Gulmoget, Bersugget, Gesundheit! (seriously THE best names for markings and colors!) Ours is a Musket.

Author: Jennie
Filed Under: Uncategorized
Fresh Pots
This is almost . . .

3 thoughts on “The Neverending Shetland”